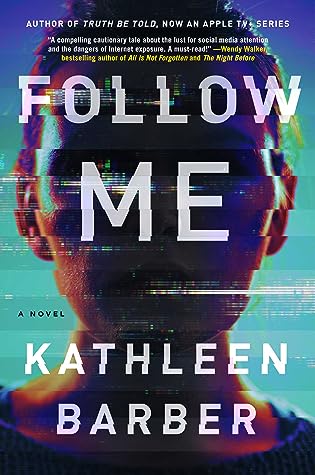 Audrey Miller has an enviable new job at the Smithsonian, a body by reformer Pilates, an apartment door with a broken lock, and hundreds of thousands of Instagram followers to bear witness to it all. Having just moved to Washington, DC, Audrey busies herself impressing her new boss, interacting with her online fan base, and staving off a creepy upstairs neighbor with the help of the only two people she knows in town: an ex-boyfriend she can’t stay away from and a sorority sister with a high-powered job and a mysterious past.

But Audrey’s faulty door may be the least of her security concerns. Unbeknownst to her, her move has brought her within striking distance of someone who’s obsessively followed her social media presence for years—from her first WordPress blog to her most recent Instagram Story. No longer content to simply follow her carefully curated life from a distance, he consults the dark web for advice on how to make Audrey his and his alone. In his quest to win her heart, nothing is off-limits—and nothing is private.

This one kept me guessing to the end!
LITERALLY!
I still didn’t know how it would end at the 98%point!

Audrey Miller has hundreds of thousands of Instagram followers and has just landed a dream job at the Smithsonian in Washington, DC where she is tasked with generating interest for a new exhibit that will soon be opening… “The Life and Death of Rosalind Rose”

It is an exhibit of dioramas, based on a rising starlet’s murder.

But one of Audrey’s followers has become obsessed with HER.

Referred to as “HIM” he has found a way to install a RAT (Remote administration tool) to her computer, and he is watching her every move, while eating animal crackers, as she eats animal crackers and gazes back at him, oblivious that she is being watched.

And, her stalker could be ANY of the many men in her life..

Told from the perspectives of Audrey, her best friend, Cat, and “HIM” this was a fast paced story that I was engaged with from start to finish.

Despite this being described as a “cautionary tale of oversharing in the social media age” (which it is), I would recommend it for readers like myself who like the “fun thrillers”! It is witty and suspenseful, rather than dark and scary.

But, I did immediately cover the camera on all of my devices upon finishing this one!! 😬🙄

Thank you to Netgalley, Gallery Books and Kathleen Barber for the digital ARC I received in exchange for a candid review! This title will be released on Feb. 25, 2020 but you can preorder now!

1 thought on “Jayme Reviews: Follow Me by Kathleen Barber”